I Hope You Can Meet Her

If I Liked Something About This

A Few Things I Know

Donald Miller is a Freaking Genius

The Fairytale of the Traveling Duchess

Today, Life Splashed Me With a Pool Noodle

A Book Is Born

The Heart of Trust

Smoothies: To Be Or Not To Be

I’m reading Unless It Moves the Human Heart, by Roger Rosenblatt.  He’s a many-decades teacher of writing, and this book details one semester of his graduate course: Writing Everything.

There are a dozen students in the story, so you feel like you’re just reading a narrative about a professor and twelve students giving their hearts to the page.  But he has also woven in his best teaching on writing essays, short stories, and poetry.  Basically, if you’re interested in taking a writing course for less than $15.00, buy this book.

“We start with the story because it is basic to human nature.  It’s like a biological fact, an inborn insistence.  In the last days of the Warsaw ghetto, the Jews knew what was going to happen to them.  They had seen their mothers and neighbors hauled off to the extermination camps, and were themselves dying of diptheria and hunger.  And yet they had the strength and the will to take scraps of paper on which they wrote poems, fragments of autobiography, political tracts, journal entries.  And they rolled these scraps into small scrolls and slipped the scrolls into the crevices of the ghetto walls.  Why?  Why did they bother?  With no news of the outer world available to them, they assumed the subhumans of the so-called Master Race had inherited the earth.  If their scaps of paper were discovered, the victors would laugh at them, read and laugh, and tear them up.  So why expose their writing, their souls, to derision? Because they had to do it.  They had a story to tell.  They had to tell a story.”

I tell them about Jean-Dominique Bauby, the French editor of Elle who suffered so massive a stroke that the only part of his body he could move was his left eyelid.  Yet with that eyelid, he signaled the alphabet.  And with that alphabet, he wrote an autobiography, The Diving Bell and the Butterfly.

And about the skipper of the mackerel schooner who wrote a message by lantern as his ship was going down.

And about the messenger in the Book of Job who had a story to tell.  And about Melville’s Ishmael, who alone was left to tell the tale.

“We like to distinguish ourselves from other animals by saying we’re a rational species.  That is sort of a commonly shared joke.  But a narrative species?  That, one can prove.”

They are beginning to wonder why I am spending so much time on the subject.  “And yet, if stories lie at the center of experience, indispensible to our being, there still must be those people responsible for telling them, those self-elected few who are the chief storytellers, and keep the race alive and kicking.  And do you know who those people are?”

They stare at me, surprised.  Someone asks, “Us?”

Raise your hand if you grew up on a rollerskating rink.

I know there’s at least a heaping handful of you out there, because I grew up on the rollerskating rink right alongside you.

(A quick shoutout to Playland, may she rest in peace, and Foxboro, who stole our loyalty.)

I took my boys today.  Boys, meet the skating rink: brown skates, orange wheels, disco lighting, and carpeted walls.  When the world comes to an end, I believe roller skating rinks might survive.  And they will look exactly the same, in their timelessness – just like the Chicago Midway Airport.

I hadn’t intended to skate, actually.  I took my big bag of writing goodness, and I thought I would choose a corner by the snack bar to read, reflect, journal and write while the boys skated laps.  (It’s okay if you’re laughing out loud right now.  It was a ridiculous notion.)

No dice.  Who can possibly think anything of depth in that screaming environment with lights that induce seizures?  Naturally, I was on the rink in no time.  And a million memories came rushing back to me.

I remembered my last day of kindergarten, when my dad chaperoned the class trip to the skating rink and taught me how to skate.  The day he taught me the magic words to keep from falling: Hibbidy-Hobbidy-Hoobidy.  The day it all began.

I remembered skating through elementary school, with so many circles who knew skating was a guaranteed successful social outing.  I skated with the marching band.  I skated with my senior class.  I’ve skated in costume (I think I was a wrapped gift, while my brother was a three-legged man – with a skate on the third leg).  I skated with my college girlfriends, as we lapped the rink, holding hands to Point of Grace’s “Circle of Friends,” sure that no life stage or friendship could possibly match the one we had found.  I have skated at every hour of the night during multiple overnighters in junior high, always waiting for the Couples’ Skate, as if this would be my big moment to declare my crush to the youth group.  When he didn’t ask, my troupe of girls went to the dingy bathroom to eat Bottle Caps candy and spray our bangs.  I’ve skated the Hokey Pokey a thousand times.  I’ve won my share of races, and thereby free soda from the snack bar.

Heavens.  Makes me wonder if I did anything else with my childhood, if I ever wore a simple pair of shoes.

Somehow, in my memory, there is always the woman with the dark ponytail all the way down her back, in her high-waisted jeans and a mint green sweatshirt.

I think I may have been a version of that woman today, as I joined two hundred people, shorter than I, who actually have no idea that the song “I Had the Time Of My Life” is from a movie they’ve never seen and it hasn’t always existed in a hip-hop arrangement.

I took the rink for the Speed Skate, while my children stood by and cheered.  They think it was a race; they think I won; I may or may not be allowing them to believe this.

The boys asked me to sit out during the Backwards Skate.  I’m still a little disappointed, because their mom knows her stuff and could have shown them a move or two.  (This is probably the public display they were resisting.)

So, anyway.  We skated today.  Tucker took off, unafraid to fall dozens of times.  Tyler stayed close, little Mr. Chatty as he gripped my hand.  He complimented me: I was better than the little grandma in the purple pants with red light-up wheels.  Maybe she’s the same lady of the long ponytail, jeans and sweatshirt, two decades later.

As we left, one of my children said, “How come we never do anything fun??”  I launched into a tirade of the true definition of fun. Punk.

Every bit of me is sore.  Go to bed, little skaters.  Mommy needs a hot bath.

There’s a reason, I suppose, why the poem doesn’t read,

“The stockings were hung by the fireplace vent with care, soon to be charred from roasting up there.” 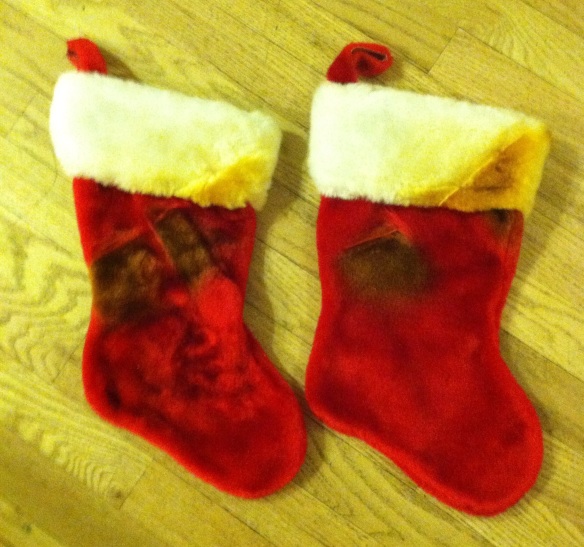 I am having lunch with myself and a book at Subway. This is a perfect scenario, as I stand firm in my convictions that nothing compares to an old school BLT.

Would I like it toasted? No, thanks. Hard bread makes my face hurt.

Cheese? No, because there’s no C in BLT.

Would I like to add any vegetables? No, because it’s called a BLT. Not a BLTABCDEFG. It’s complete and brilliant, in and of itself. Three letters.

Add extra mayo, a dash of salt and pepper, and I’m so down with my old school self. The only downside is that I’ll carry Subway’s sour aroma with me all day long, in my clothes and in my hair. But this is a small price to pay; such is my love for bacon and mayonnaise.

Lots of people are here today – families on their way to a post-Christmas matinee, teenage couples basking in the freedom of a few more days off school so they may gaze adoringly at one another and share a soda, some grown boys eating with voracity that makes me think of my future grocery bills. It’s a veritable plethora at Subway today.

I’m seated near the bathroom. Not because I love sitting near the bathroom, but because perimeters have become my preference. Anxiety? PTSD? Neurosis? Call it what you want. I’ll always take the corner spot. The middle of the room? Too vulnerable. I need to see what’s happening, or at least know nothing’s happening behind me.

A little boy has gone into the bathroom by himself, and his dad waits with the little sister at their table. From the bathroom, I can hear this warbling sound, almost a moan, not quite distress, but floating all over some imaginary, scattered octave.

Then it comes to me: the little boy is singing. He knows he’s alone, but he’s forgotten we can hear him. And he’s singing, with great abandon, the chorus of Angels We Have Heard on High.

Glory to God in the highest, from the bathroom in Subway. At this moment, I can’t think of a more beautiful sound.